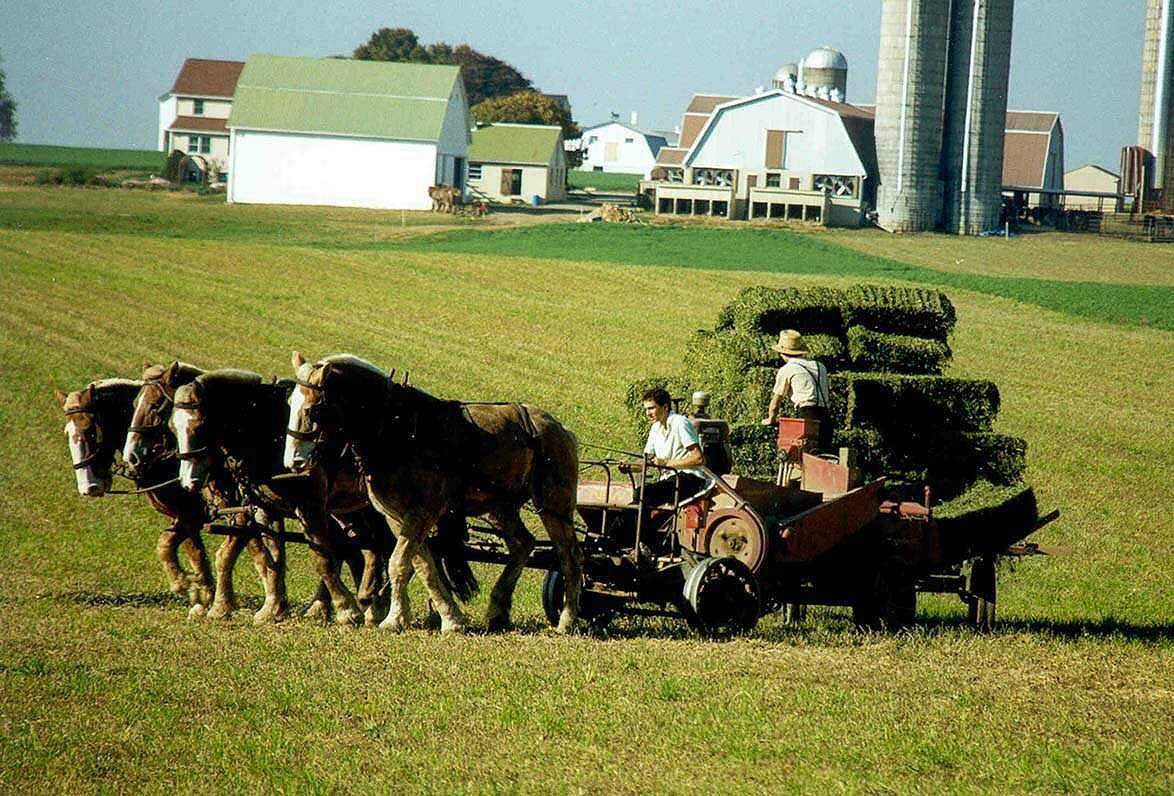 Amish communities are probably some of the safest, healthiest, and most level headed people and communities you could ever find. But why? Are they genetically superior? Do they know something we don’t? Do they have a cure all witch doctor? Or do simple lifestyle changes just add up to create an excellent lifestyle of its own?

Let’s look at some differences they have, compared to the rest of the “English” (aka, American) population. 1) They hold a semi regular schedule.

Amish don’t sign their kids up for soccer- so they aren’t up late washing uniforms, fretting over if their kid did their homework. They don’t stay out late to party. They don’t binge watch Netflix into the wee hours of the morning. They don’t work strange shifts. They wake up around sunrise and go to bed within a couple hours of sunset. Getting enough sleep is bound to maintain their health and their sanity.

2) The Amish eat healthier than we do.

They grow their own food, and if they don’t grow a certain food themselves, they trade with their neighbor, because their neighbor grew it. They don’t have a ridiculous amount of sugar in their day to day diets, they eat ‘real’ foods (ex. not margarine, butter). And what they do eat, has a purpose, to taste good, and give them the energy they need to work hard on their farms. Also, it’s important to note that they live away from cities, and most are still several miles away from small towns. Fast food isn’t part of their everyday diet. They do occasionally treat themselves of course, and let me tell you- I’ve seen a hungry group of young Amish men at an ice cream parlor- they can put down ice cream faster than an alcoholic can put down his shots at the bar on Friday night. Which bring us to my next point.

They don’t smoke, or drink, chew tobacco, or do drugs. In recent years, some of the younger Amish community has been affected by illegal consumption of drugs, but not nearly to the degree that the rest of America has struggled with. A lack of alcohol and tobacco means that they’re more likely to make good decisions (because they aren’t under the influence of drugs or alcohol), and they are less likely to get cancer, because they don’t smoke or chew tobacco. A recent study conducted by some professors at The Ohio State University, found that Amish have 63% less cases of cancer, as compared to the general American population. (See this link for more info) Not only this, but there were almost no instances of cervical cancer. Which moves us to my next point.

Read this:  5 Quick and Easy Ways to Downsize Your Closet, Based on Your Personality

Why? Probably because the Amish wait until marriage for sex, they have one sexual relationship to last them their entire life (this relationship within the marriage) and the Amish are much less likely to cheat on their spouses. I know this is where I’m going to get more hate mail in my twitter inbox or the comments section of this- but this third wave feminism movement we Americans have right now- is ridiculous. Women want to pretend that having dozens and dozens and three digit numbers of sexual partners is somehow empowering. They want to pretend that sex is just part of life, even if you’re not in a married or even monogamous relationship. I think the Amish have it right by wanting to be a part of one ‘boring’ monogamous relationship for life.

5) Their gossip stays to a minimum.

Why? That’s probably one of three reasons, moral/spiritual obligation, they’re too busy with their chores, or because communication is limited due to their lack of involvement in social media, or even phone use. If they do own a landline, it stays in the barn, not the house. This keeps them from being disturbed when they’re inside enjoying a meal, family time, church, or sleeping. They understand that if someone wants them to know something about themselves, that individual will tell them, they don’t need the entire neighborhood playing a bad game of telephone, skewing the story or ruining that person’s image. 6) They stay off social media/aren’t concerned about portraying themselves as beautiful or perfect all the time.

When those Amish women are cooking (and if you’ve never had an Amish prepared meal, you’re missing out!) they’re concerned with the taste, the nutrients, and the size of the meal. They don’t try to arrange their plates to be “pretty” so it can go out on their Instagram. And when the men are working, they wear practical, functional clothing. Sometimes it has grease or grass stains, or streaks of manure. That’s okay, because they aren’t going to take selfies of themselves working, they’re going to get the job done, and the task they complete will be built to last and functional. The children aren’t worried that their toys are different from the neighbors’, because the neighbor kid isn’t posting pictures of it on social media & bragging. They share. And they share because they realize this isn’t a competition to see who can get the most or most expensive stuff. They’re content.

What’s the perk to not competing to have the best of everything? Money in your pocket! The Amish families that I’m lucky enough to have a friendship with, have taught me some valuable financial lessons. They buy everything up front and with cash. And they work several different trades or jobs to do this. Our local Amish sell honey, vegetables, maple syrup, peanut butter, furniture, and saddles that they make. They also shoe horses, build barns/houses, raise livestock, train horses and raise grains/make livestock feed. Not only this, but they don’t get instant gratification for what they do. A friend of mine, Jacob from Orleans, Indiana, has been shoeing my family’s horses for years, even since he was barely a teen. A few years ago he, as a 20 year old man, bought his first farm, built a beautiful two story white farm home, a large red barn, a hen house, a shed, got married, and now has two beautiful babies, and he’s not even 25. How? Because when my family (and all the other local horse people) paid him, he put that money in his pocket, and didn’t spend it. If he made a thousand dollars one day shoeing trailer load after trailer load of horses, the next time you visited him, he’d be in similar clothes, with the same shoes, same buggy, and probably, the same horse. He has a purpose in mind for his money and he didn’t take his sights off that until he had what he wanted. Because of that, he is living debt free.

Read this:  The Price of a Dream

I think Jacob’s example is enough of an example. Not only did he get out of bed every morning to shoe horses and help his father, but he worked diligently. He smiled, made conversation, kept his temper even when horses acted up, and he consistently did a good job. Every. Single. Time. When he did make a mistake, he’d pull the shoe and start over. The horses he shoed would walk straight and without pain, and because of this, he grew quite the customer base. His hard work has certainly paid off.

9) They have great immune systems, and they don’t rely on medicine to fix their problems.

I’ve seen the Amish go straight from shoeing a manure covered hoof, straight to drinking water or wiping a fly from their cheek. They aren’t afraid to get dirty, and they’ve built up a great immune system by not using hand sanitizers, unnecessary medication or by avoiding what’s natural. They let their newborns crawl on the floor, and their girls run barefoot by the barns & in the yards when they push mow. They bathe once or twice a week. I’m not saying the Amish know more than a well educated doctor who spent a decade in medical school- but they aren’t dying off all at once by not taking the preventive shots he keeps pushing for. What they’re doing seems to be working for them.

10) God & Family comes first, and friends/neighbors are a close third.

Keeping a good relationship with those close to you is great for your mental health, and even better for the health of your home. If someone becomes sick, injured or tragedy strikes, friends, family & neighbors will flock to come take care of the sick & injured, and rebuild the burned barns. Not only this, but they have church in their homes, and the location of church rotates every Sunday. This keeps everyone connected & in tune with each other’s personal lives. A tight knit community is key. And an unwavering faith in God keeps the peace, a sane mind, a common goal, and a sense of security.

Read this:  What's actually going to Happen when SHTF

I could probably talk about how much I appreciate & admire the Amish community all day. What lifestyle choices do you think the Amish have perfected? Or what are the downfalls of the way the Amish live? Comment below, and as always, thanks for reading!