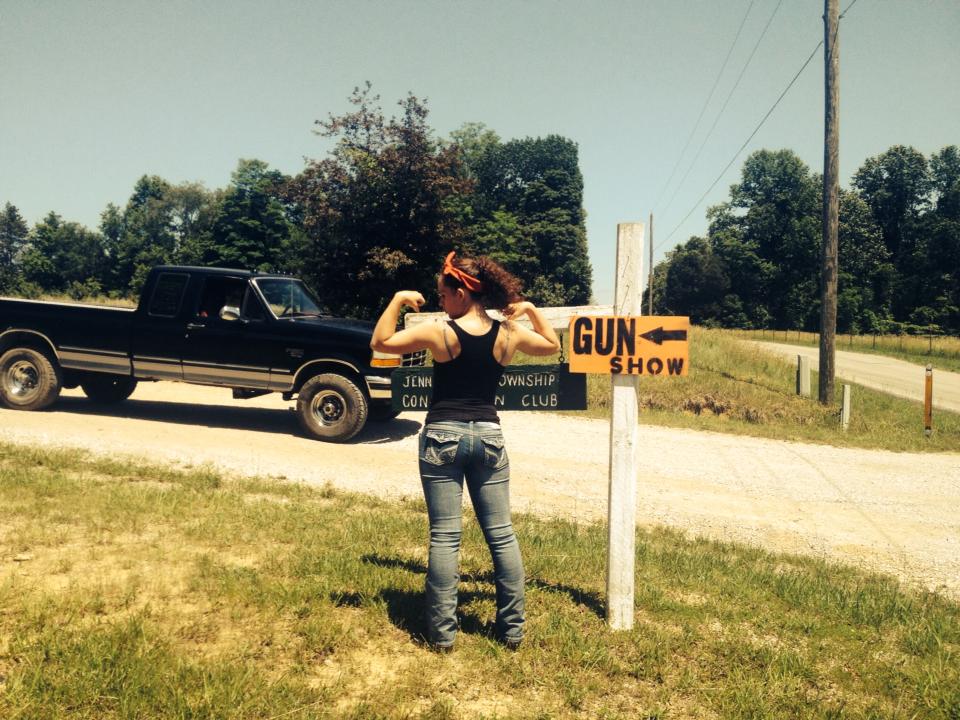 If I were to describe my childhood by the chores I worked, the clothes I wore, the interests I kept, and the muscle I built- you’d probably assume I was an old school farm boy.

I grew up with an intense desire to be outside. I loved the outdoors, I loved physical labor, I loved my animals, and I loved feeling productive. I grew up differently than most girls to say the least. Starting when I was nine, my mom and I put up hay in her two tiered barn loft, by ourselves. I carried fifty pound feed sacks two at a time. I broke out heavy frozen water buckets in the misery of winter. I helped split and carry in wood for my family’s sizable log cabin. I helped my grandparents get hay in every summer, and I always gave the boys my age a run for their money to keep up. I was the girl who would hug two hundred pound molasses tubs in truck beds and safely lower them to the ground. I loved my independence. Though they were called chores, they really didn’t feel like it. I took pride in my work, it was what I had. It is also important to note that I wasn’t pretty; I have a plain face. I never fixed my hair or makeup, and I didn’t dress to fit in. I wore my wranglers, v-neck tee shirts and good cowboy boots. Boys were my friends, not romantic interests of mine. I knew people wouldn’t appreciate me for my looks or charisma; I made sure I spoke rarely, spoke humbly, and kept a good attitude.

I didn’t fit in with most women, they were too dainty and judgmental of me. I made them uncomfortable because I related to their boyfriends & husbands better than I did with them. I thought differently. I spent time with people who understood the realities of life and know that life is not fair- and that typically means I spent time with men. I was conservative, I learned to think with my head instead of my heart. I know everyone has a purpose. People are meant to help one another, be good stewards of the critters we were blessed with, and grow closer to God. Animals are meant to serve people. It doesn’t matter how long each creature lives, people included, because quality beats quantity every time (Being born with a silver spoon in your mouth doesn’t mean you have a quality life either. If your life doesn’t have a purpose, a passion, or a drive to be something better- it’s meaningless). To most women though, they felt that everyone should be given equal opportunities, animals are for cuddling, and girls should dress to be seen and admired. That just wasn’t me.

And for gentlemen? I intimidate many. I don’t mean to, I don’t want to emasculate anyone. I don’t want to come across as butch, but I do. I can unload a truck load of feed quicker than most men. I know how to change a tire. I studied the magic behind diesels on my own terms. I don’t speak up unless I’m sure of my words- so I look like I know a lot more than I actually do. I intimidate people, even though that’s the very last thing I want.

So aside from having a difficult time relating to most women and being ‘too much’ for some men- What did ‘being tough’ mean?

Read this:  My First (and Only) Blogging Income Report

It meant I didn’t fit in a lot. I come across as a crass person. Heartless even. It means that a lot of people don’t get to see my heart. They can’t look beyond the premature wrinkles on my face, the strength in my shoulders, or the reasoning for my different perspectives.

It meant that I was more self assured. I knew I could tackle any task, because I was already accustomed to my own independence.

It meant that I didn’t expect too much. I knew how life could be. I hoped for the best, but tried to prepare myself for the worst.

It meant that others turned to me in times of disaster, looking for guidance, even when I was no where qualified for the job.

It meant that many boys found me unattractive. I was overlooked quite a bit, but that was okay, because I was too busy doing my own thing.

It meant having a normal conversation with someone new, and someone from my past will walk up and slap me on the back and talk about how big and tough I am- leaving myself and my new friend feeling slightly awkward. My friend of course, didn’t mean anything by it!

It meant that people underestimate my feelings. I didn’t even cry at my own dad’s funeral, because I was too busy being ‘tough’. So most of my friends & family would be shocked to know how easily I can crash and burn when I’m with someone safe. When a tough girl finds a man who can keep up with her- she completely falls apart. I just bawled a month into meeting/dating Devin. I’d had a hard day, he handed me some drive-thru fries, I dropped them, and just like that (at the drop of a fry, I guess you could say) I sobbed like a baby.

It meant I got hit on more times by other women, than I’d like to count. Honestly it’s probably just the way I dress-  sorry for being misleading!

Read this:  Failure, Vulnerability, and all that other stuff that makes you Successful

It meant that people expected more out of me than I was capable of giving. I never tried to let people know my emotional limits, so they assumed I could do anything. It’s kinda flattering when you think about it.

It meant people always turned to look at me when Gary Allen’s ‘Get off on the Pain‘ played. Yeah- I guess I sometimes like to do things the hard way.

Being tough means more people shared themselves with me. I guess it’s easier to talk to someone like me who’s ‘been there and done that’ than it is to try to explain yourself to someone who doesn’t understand, and who can only flood you with their unwanted sympathy.

At the same time though, it meant I sometimes came across as a jerk because I don’t seem very sympathetic to your stories when you want me to.

Being tough means I’m an outsider, and I best relate to other outsiders, like your grumpy conservative father.

So thank you for such a nice evening and the awkward small talk- truly, thank you. You’ll have to excuse me though. I’d like to go have a drink with your dad in the garage. When he offers me a beer I’ll have to ask for a Coke instead. I may look thirty five, but, really, shockingly, I’m not old enough. I’ve lived a hard life dammit! Let me pull up a lawn chair and ask him how his latest project is coming along.