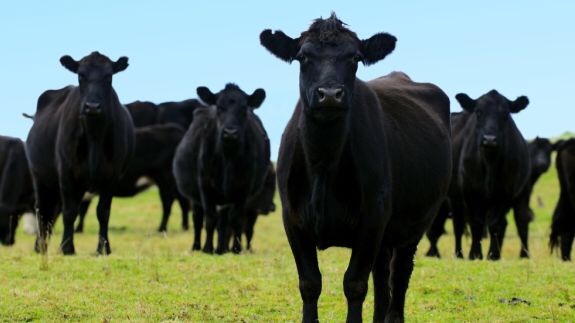 I wanted to write this in response to the many false PETA advertisements, propaganda, statements, and lies they spread about the American Agricultural industry. I respect veganism, and it’s many benefits. It’s good for the environment, it’s healthy, and it’s a decision that takes dedication.

However, to be vegan, an individual doesn’t have to attack farmers or agriculture with false facts & statistics.

Canada & the U.S. are pretty similar in their legislation & rules on how meat lockers operate. Mexico, however, can be brutal, and that’s where most of PETAs video footage originates. Please keep this in mind next time you see footage from PETA or the Food, INC. video that seems to becoming popular again.

Let’s talk about the beef industry first. The cattle are raised from calves by farmers after being weaned (See the last paragraph for more information on breeding & artificial insemination please). Farmers feed them twice daily (hay they grew, plus grain they grew that is ground up, and mixed with soybean meal, corn meal, and minerals). The cattle have a barn to go into, but have access to a dry lot at all times. They’re all raised together so the cattle all know each other well. Sometimes during the summer the cattle get loaded onto trailers and moved to grass pastures, it’s like a vacation to them.
Then, they are taken back to their ‘home’ cattle barn/ dry lot to feed them more grains a couple weeks before harvesting.

When it comes time to harvest, the cattle are loaded back on the trailer, driven to the locker, and the trailer is backed into a chute. Cattle are super curious, so they jump off trailer & walk the chute on their own. If a bovine has a bad leg or is sick enough that he isn’t walking right, he goes right back home with the farmer, or there’s someone waiting at the locker to buy the sick or injured steer/bull. It’s illegal in the U.S. to slaughter a cow that cant walk freely/easily on its own. The chute is usually inside a building where there’s AC or fans, and they aren’t getting rained on or exposed to the sun. This chute is basically a hallway, with pens on both sides. When a pen gate is opened for the cattle, it blocks off the hallway, and the cattle go into the pen by themselves & stand there. Usually, the cattle are pretty excited by now because there’s brand new cattle all around them they’ve never met before, so they bellow and talk to each other. It probably sounds eery to people who aren’t around cows, but they’re just talking. It’s actually cute to watch “hey look cow friends, we have new cow friends!”. Most places leave the cattle alone a couple hours or a couple days to relax (with hay & water available) so the meat isn’t tough when harvested. A scared animal = tough, useless meat. Most places play the local radio station for both the workers’ & cattles’ nerves.

You can’t give the cattle a shot because you don’t want that in their meat. If an animal is given antibiotics/shots/hormones, you must legally wait 90 days after injection before harvesting the meat. USDA inspectors ensure this by inspecting the meat.

There’s a prod that has high voltage in it that locker (slaughterhouse ) workers tap the cattle on the head with, it instantly stops their heart & they fall over dead. It’s literally just a cow flopping on its side, dead. When you do this to the first cow, the others all turn to look at it, like “what’s his problem?”. They don’t understand the steer is dead because cattle don’t die like that naturally. When a cow dies naturally, it’s in its sleep, or its being ripped apart by predators, starving, dying of an illness or dying during birthing. When that happens, it’s usually loud, and they make the most awful, heartbreaking noise. It’s not like that with a prod, they just flop over. So for cattle, they’re just curious, they don’t even try to run, they all face the first cow out of curiosity, and who ever is working the pen just casually zaps each cow. They then immediately begin the process of butchering. It’s peaceful, and most of all, humane.

Read this:  The Total Off-the-Grid-Living Guide

This is only for 1% of the beef industry though! The other 99% is factory farms right? Where animals are beat daily & then killed a most brutal death? That’s also another false claim made by PETA. According to the USDA (a reliable government agency, that is involved in, literally, every slaughter house in America, states that 90% of all farms in America have 100 cattle or less (and the majority of these are actually less than 50 cattle per farm), and together, this 90% makes up almost 50% of the national beef population. Not only this, but there are laws in place that are to ensure the animals’ welfare. The fines for intentionally harming cow in Indiana can range from $500 to $10,000 per cow! And of course, cattle have to be well enough to freely unload themselves from the cattle trailer/bull hauler, AND cannot have any medications, shots, hormones injected within 90 days prior to their harvest.

As always, thanks for reading!

BONUS: Artificial insemination: Another point I really want to discuss, is how farmers breed cattle. Something that upsets me a lot is when people call the AI (artificial insemination) chute a “rape rack”. Let’s discuss the process of artificial insemination. Farmers or farmhands extract semen from bulls. There’s a ‘breeding dummy’ he mounts, a farm hand puts a tube down that he ejaculates into, and that’s it for the bull. He does this every couple of days, and absolutely runs to the dummy every chance he gets. It’s enjoyable for him, and by no means, is it rape. This semen is then put into a spinner, and divided into up to 10 bottles for 10 cows, depending on how high his sperm count is. Breeding cows are then put into AI chutes, and there’s a syringe with a tube attached that injects the semen into the uterus. This isn’t rape. The cow is ‘in heat’ when this happens, meaning she ovulating, and wants to breed. She usually pushes back on the syringe when you do this. I know this all seems disgusting (which, it’s not a fun job) but it’s so much more humane than turning an excited bull out with a cow, where he puts his full weight on her, and sometimes rips his cow’s uterus in the process of breeding. If that happens, a vet must do stitches, and the farmer must worry and prevent her from getting infections.